A BNI Welcome Halfway Around the Globe

Members at BNI Gateway in Singapore take turns to list the generated business opportunities or referrals, as well as the value of each concluded contract.

Geneviève Langlais, President of BNI Express, was visiting family in Southeast Asia in late-June and early-July which meant she would miss weekly meetings at her chapter in downtown Montreal. Using the Internet she contacted BNI Gateway in Singapore and that chapter’s President, Desmond Seah, quickly got back to her with an invitation for Geneviève to attend their July 3rd breakfast meeting.

“I was curious to see if the Canadian and Asian BNI formulas for meetings were the same and they were,” said Geneviève. “BNI Gateway has 21 active and committed members who take their meetings very seriously and get a lot of business done.”

The business cards of members were presented on a display holder as opposed to in a box. Geneviève found the 60-second presentations followed the BNI structure and that every second was used to the utmost. People’s requests were clear and specific and gave responses during the period for distribution of referrals.

Everything took place in English so it gave Geneviève a chance to practice hers. The people were very warm and welcoming. “They were really surprised and flattered that someone from as far away was there to take part in one of their meetings,” observed Geneviève.

While the format was the same there were some unique aspects. On the tables were plastic clappers to make the applause much louder. Something that struck Geneviève was that late in the meeting there was a coordinator who assigned people to take care of the One-on-Ones. There were people who did it naturally, but others were dispatched by the coordinator.

Geneviève was quite impressed that in the period when concluded business was announced that each person stated the amount of money involved. For example, ’This week I landed a contract worth $10,000 thanks to Mr. X.’  “I found it very stimulating and the numbers that were reported had a lot of zeroes after them,” said Geneviève. “It was a chapter where the exchanges were big. We have since discussed the idea of using this feature at BNI Express in Montreal.” 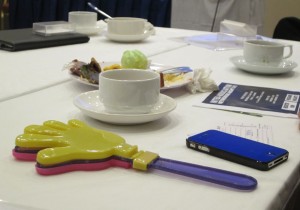 The plastic clappers used by members at BNI Gateway in Singapore

Summing it all up, Geneviève found the experience was interesting and confirmed that wherever you are or whatever language you speak, the BNI formula is effective. “I found it very enriching to compare the way things are done and to find that what makes a chapter unique is the people who make it up,” concluded the President of BNI Express.